Dance of the vampires in Copenhagen Review 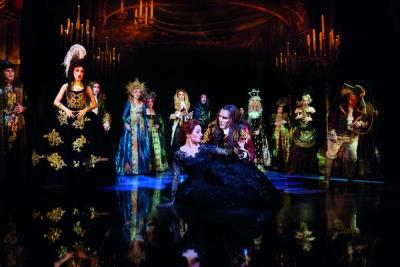 Since I first saw Jim Steinman’s masterpiece “Dance of the vampires” on October 10th 1997, I have been hoping and praying for it to come to Copenhagen. I have written several times to Det Ny Teater, as that theater company would be the obvious choice and in my dreams it would obviously be the best one ever. Since then I have seen it 25 times, in 11 countries and 9 languages and now after 22 years it’s finally time for it to run in Copenhagen. I must admit comparing it to the other 25 show, proved more difficult than I had imagined mostly because the Copenhagen version is very different from the others and I must at least give credit to the company for having the guts to do such an expensive musical so differently.  Others have tried and failed miserably and let’s be clear from the start: If you’re looking for a carbon copy of the German ones, you will not find it in Copenhagen. This review is based on the premier show and 2 days later.

The show had not been running long before the first change is obvious. Instead of roaming around in the blizzard looking for the professor, Alfred is seen driving around in a car. The reason for this change, they told me, was to combat the known goof about the Nobel price. The original play takes place in the 19th century, but the professor talks about the Nobel price which was first awarded in the 20th century, so in order to correct that, they moved it just a few decades, to a time where we had cars. I’ll accept that and kudos for authenticity.

That goes for the costumes as well. In the original, the town’s people clothes looks like traditional central European peasant outfits, but here we acknowledge that the story takes place in Transylvania, so they did a great job creating authentic Transylvanian outfits. They are truly colorful. I could have used some more prominent cleavage on Magda and not only because I’m a dirty old man, but there’s a joke that demands it. There are a few changes in Sarah that may cause some objection. As the gift from Krolock, she received Red shoes and a dress instead of just red boots and her ball gown is black instead of red, as we have been accustomed to, but I can live with that. She is still gorgeous. The vampire costumes for the ball are gorgeous and again very authentic from the area, as opposed to the raggedy worn threads from the original and I guess it makes sense that just because you have lived for hundreds of years your clothes doesn’t have be that old. I could feel that the professor’s suit is a bit to modern, but then we have moved in time.

I don’t think the set designs in Act 1 will impress anyone. The big inn has been replaced mostly with backdrops and smaller movable props that were far from the original. Act 2 was better and there were moments of real beauty. I especially likes the crypt scene and I found Eternity visually appealing as well, even though the caskets are not lowered down, like in the original. In the opening scene the singing painting had been replaced with singing sculpture and I can accept that as a refreshing change, but I do prefer the original. Judging the whole show I think the sets are the weakest point of the show.

Having said that, let’s go to some strong points. Anyone who knows me knows that I’m very anal when it comes to the music, as very often they don’t seem to get how it needs to sound. This show is in the top 5, for me and in fact Eternity was one of the most enjoyable yet, both musically, vocally and visually. I could have used a bit more prominent orchestra at some places, like the “Love duet” and “Carpe noctem” is not up to its normal standard, but still overall pretty good. The cast is amazing, Peter Jorde, although never reaching Barton or Borchert levels did a great Krolock. I thought he was a bit too staccato some places in the Insatiable Appetite, but that may also have been the translation. I had been looking forward to Julie Steincke’s Magda, as she is rather big in Denmark’s musical scene and she did not disappoint. In fact I enjoyed the scene with her and Chagal in the crypt more that I normally do and speaking of Chagal, I was not that impressed with Jesper Asholts take on Chagal at the first show (he was better on Saturday). It was too comic and I was a bit scared in the beginning, because the horrible Brodaway version has shown us that the comedic balance of the show is so essential to maintain. Luckily the show quickly came back on track and luckily the professor, who is often played too comic, is a bit more serious in Kim Hammelsvang’s competent version. For me, one of the best professor’s. The character of Alfred is played by Søren Torpegaard Lund and every bit as good as most of the German Alfred’s. A very strong “For Sarah” indeed, which was rewarded by the audience. For me though, the show biggest star is young Monica Isa Andersen and her performance as Sarah in her first big role. She outperformed several of the Sarah’s I have seen in the past and she should consider German lessons, as she could probably continue in Germany after the show ends in Copenhagen and if Bat out of Hell comes to Denmark, she could do a great Raven as well.
The Herbert character was not among the best. He’s supposed to be the counts gay son, but when watching the first scene he has, at the end of act 1, he gives the impression of the counts retarded son.

One of the biggest disappointment for me, but obviously not if you never saw the show before, was the cuts. I have been used to cuts ever since the original, but I thought we were done with it.  There is no “Say a prayer” part. Apparently they thought it was to “end of the act” and I can see what they mean. It has a very powerful ending, but has it ever been a problem? There is the vampire intro to the last scene and no vampire exit after Eternity. In Carpe Noctem they cut the last “metal guitar”, which bothered me, as I always loved that contrast between hard rock and an almost opera style choir that ends that song. The instrumental break in the finale was cut a bit and there was no English lyrics at the end. And speaking of the end, that leads me to the thing that will probably be most controversial. The ending. It’s very different and most reminiscent of the Vienna 2010 ending, which to my recollection has not been performed since. All the way from the end of the ball and the escape is different. In the original the professor remains oblivious to Sarah biting Alfred, in par with the original movie,  but here he sees it and tries to prevent it,  but fails. He sings a very different quieter intro to the finale, with different lyrics, after which Sarah and Alfred snares at the professor and runs away. The professor is then taken away by 2 vampires and we get a bit of the overture again going into the finale song, which starts with Magda and Herbert, but includes Sarah and Krolock in the end. Like in Osaka there were no “crossdance” at the end.

There some changes I like and some not so much. The addition of 4 disguised vampires in “God is dead” actually makes sense, as the last part of the song is sung by the vampire-choir and the addition of 4 Waltz couples in “When love is within you” helps emphasize the fantastic waltz feeling if the song. Why Koukol can be seen in various scenes howling like a wolf I fail to understand and I also didn’t think Rebecca’s continuing search for Sarah, which opens act 2, was need although more understandable, as she must be very lonely at the inn at this point.

So is this a show that’s good enough to come to Copenhagen for? In my opinion it certainly is worth seeing, if you can get past that it does not look and sound like we’re used to and especially if you want to see the different ways it can be presented, Copenhagen is unmissable. I had to digest some of the changes the first night, so after that happened the second night was certainly a very enjoyable evening, but then again, I can forgive a lot as long as they do the music right. Is it the best ever ? No, but it's still in the best end and a thouroughly enjoyable piece of theater.