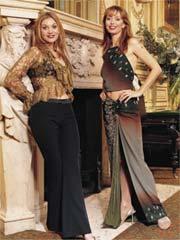 THE week when we first met in Cambridge was a crazy one. We were both work-shopping for a Magic Flute opera, and I guess my first memory of her was that she walked in and she had this amazing hair. Blonde, stunning, curly and right down to her waist. So I was thinking, "Cow, what crazy hair." Rebecca and I are from quite different backgrounds. She’s the daughter of an opera singer, and at first she didn’t want to go into opera. But for some reason I wanted to be an opera singer from the age of about 12. I don’t quite know how it happened because I’m from a family that’s completely unmusical. Mum and Dad weren’t into music at all. There was never music played in the house when I was little, even though I think my grandma used to be a singer. My mum used to show me pictures of her all dressed up in opera outfits and I think maybe somewhere in my subconscious I decided I loved my grandma and she wanted to be an opera singer and therefore I’m going to do it.

Rebecca’s a soprano and I’m a mezzo, so there’s no competition there, and we do a completely different repertoire. Our capabilities are completely different and I think that before we were a little worried about how such contrasting voices were going to work. Now I think we’ve figured it out. Rebecca’s husband’s done a lot of writing on this album for us and he knows us and our voices really well - he’s written some amazing stuff which blends our voices perfectly.

The other thing is we’re quite telepathic. It’s bizarre. One of us knows when the other one is going to do something. When we sang the national anthem at the FA cup, the introduction came in completely wrong and neither of us clocked it and we didn’t come in. We didn’t even look at each other but we both came in on ‘Send her victorious’, exactly the same word at exactly the same time. And that’s happened so many times it’s really uncanny. There was definitely a point when this all started when we realised it wasn’t just going to be an easy ride. There’s a lot of things thrown at you, difficult things to do with the business. The only shame of it is we find we have less time to talk about things we really like to talk about. I’m so glad we’ve known each other for such a long time because what we have is a real trust that if one of us says something, the other is going to agree with it. We’ve got a really strong respect for each other and we can really relax. After all, we spent two months touring the Magic Flute around America, sitting next to each other on a coach, hung-over and tired, day after day. That’s a real test of any friendship.

IT’S like a family relationship we’ve got. We’re more like sisters than friends because we’ve been through some real ups and downs together, working together in opera and now through the record deal and we haven’t always got on. We’ve fought and we’ve shouted at each other but we’ve also kissed and made up again. We met about four years ago in Cambridge. We’d both auditioned for the same opera company and they’d arranged to have two weeks of weird and wonderful workshops. The first day I walked in I set eyes on Karen straight away. We sort of smiled at each other, thinking: "God, what have we let ourselves in for?" At this point we had no idea that we’d end up working together but it was good to have someone to bond with, to have a laugh with during the workshops and then go for a drink and chill out with in the evening.

Opera’s a strange life. It has to be in your blood because there’s no other reason to do it, unless you really have to. You’re away from home an awful lot. You tend to form really close relationships when you’re away on tour, the people you’re with become almost like your family, but then when you’re back home you forget them. Karen was one of the relationships I didn’t forget about. We sort of adopted each other because we knew we could have a good laugh and we could both see the funny side of the things we were being asked to do.

The big break came when we were busking in the Piazza in Covent Garden. We weren’t looking for a record deal at all. We’d just been busking on and off for about a year-and-a-half to pay for our singing lessons. I can’t tell you how much we were earning because that would be breaking the buskers’ code. But someone spotted us and rang up and said: "Are you one of those opera babes I saw busking in the Piazza". (That was how we got the name.) I just laughed. He said: "Well are you?" I said: "Might be." And then he asked us if we wanted to sing at the FA Cup final. Which we did: it was an amazing experience (left). We sang ‘Abide with Me’ and the National Anthem, and we were so nervous. It was just like being at a big thumping rave, so loud, and there were so many people screaming.

Getting the record deal has made us a lot closer. We fought a lot when we first signed it - they were throwing a lot of ideas at us and I was saying I’m not sure that’s such a good idea, and she’d be saying she thought it was. That was a trying time. We’re much more of a team now, because you have to be when you’re dealing with a big company and you can so easily start to feel lost. We’re also very able to criticise each other, so sit there and say: "Ooh love, I think you could do that a bit better."